What Is Active Directory?

Active Directory (AD) is a database and set of services that connect users with the network resources they need to get their work done.
The directory contains critical information about your environment, including what users and computers there are and who’s allowed to do what. For example, the database might list 100 user accounts with details like each person’s job title, phone number and password. It will also record their permissions.

The services control much of the activity that goes on in your IT environment. They make sure each person is who they claim to be (authentication), usually by checking the user ID and password they enter and allow them to access only the data they’re allowed to use (authorization).

Our complete suite of products helps you to control your entire networks, assign users and security measures. Choose the perfect product for your needs from our portfolio.

ADAudit Plus transforms raw and noisy event log data into real-time reports and alerts, enabling you to get granular visibility into Windows server activities with just a few clicks.

What does ADAudit Plus do? 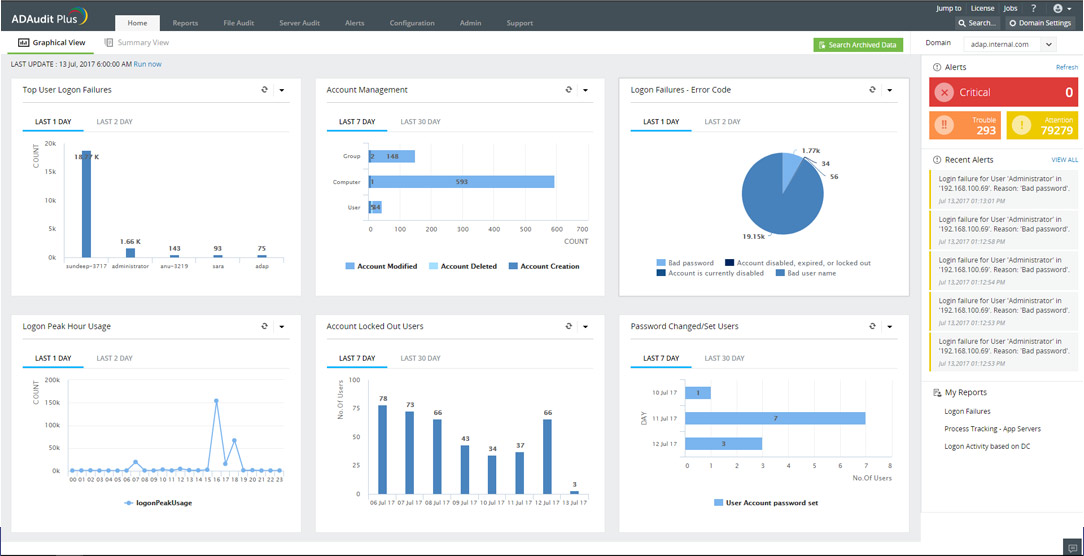 ADManager Plus is a simple, easy-to-use Windows Active Directory Management and Reporting Solution that helps AD Administrators and Help Desk Technicians with their day-to-day activities.

With a centralized and Intuitive web-based UI, the software handles a variety of complex tasks like Bulk Management of User accounts and other AD objects, Delegate Role based access to Help Desk Technicians, and generates an exhaustive list of AD Reports, some of which are an essential requirement to satisfy Compliance Audits. 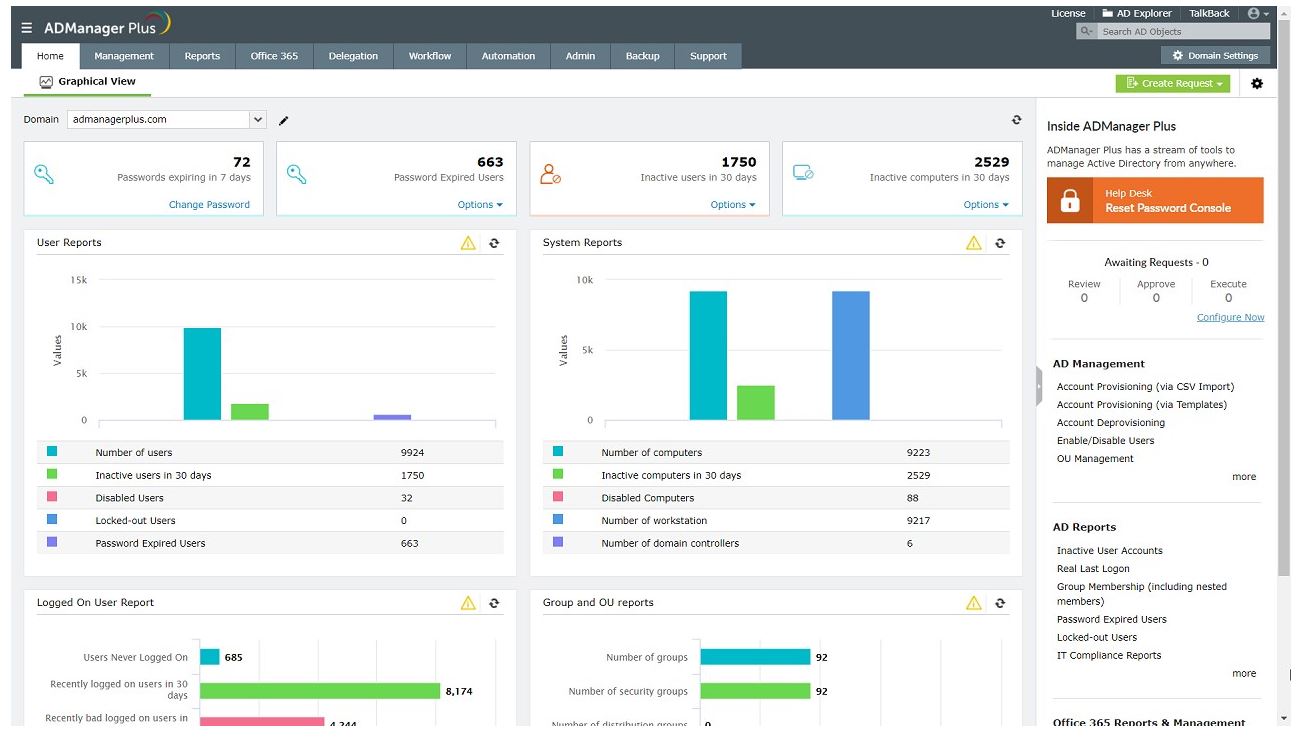 AD360 is an integrated solution for Identity and Access Management (IAM) needs in Windows environment.

This web-based software portfolio unifies all the functionalities needed for an enterprise: from user provisioning, self-service to risk governance and offers it with a simple, easy to use interface. AD360 is the right solution for bridging the gap between technology and the complex business needs.

AD360 provides all these functionalities for Windows Active Directory, Exchange Servers, and Office 365, You can just choose the modules you need and start addressing IAM challenges across on-premises, cloud, and hybrid environments from within a single console.

With AD360, you can dramatically improve how IT supports your diverse business needs. Whether it’s on-premises, cloud-based, or a hybrid, by leveraging the capabilities of AD360 you can make your IT environment more secure and easy to manage.

This software helps domain users to perform password self-service, account self-service and self-service of their personal details (e.g., telephone number, e-mail id, etc.,) in Microsoft Windows Active Directory. If you have installed both products, you just have to provide the details of the computer where ADSelfService Plus is installed, along with its Port Number.

Used by tens of thousands of system administrators worldwide for over twenty (20) years, Hyena is known throughout the industry as one of the top Windows and Active Directory management utilities available…at any price!

Netwrix Auditor is a visibility platform for user behaviour analysis and risk mitigation that enables control over changes, configurations, and access in hybrid IT environments to protect data regardless of its location.

Netwrix Auditor helps us with Active Directory auditing and reporting on attributes that have changed and allows us to quickly respond to the events that have the potential to take us out of compliance.

Complete visibility into what’s going on in your Active Directory and Group Policy.

ADAudit Plus helps me be in command of the technical environment in my Active Directory network. It is easier to find logs and manage [them] more effectively. The [low] cost for the many features got our attention

I highly recommend ADAudit Plus. Now, I can easily monitor user logons, file deletions or modifications, [and] changes in AD, and export them as reports. The friendly UI and product support before and after purchase are excellent.”

UserLock offers a level of protection that small, medium and large business should be implementing as part of their security roadmap

See how your business can benefit from having your IT solutions simplified and get in touch now!

Get in Touch
Page load link
Go to Top